A Mother’s Day moment of remembrance 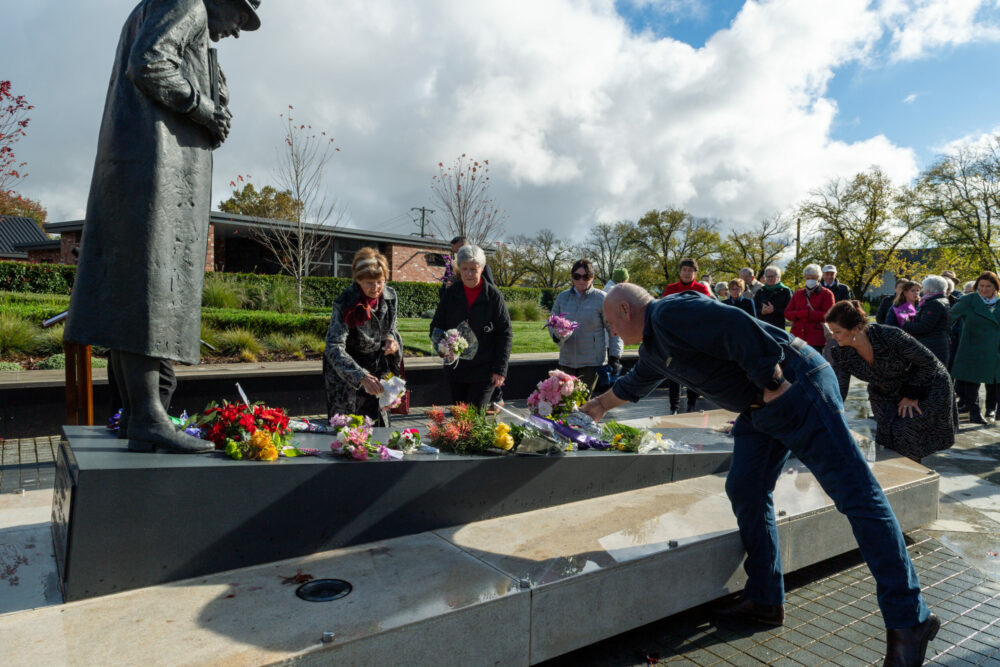 Thoughtful, colourful: Many floral tributes were laid by community members at the feet of the Grieving Mother sculpture. Photo: MICHAEL CURRIE

A SHORT Mothers’ Day service last Sunday at Alfredton’s Garden of the Grieving Mother remembered special mums, grandmothers, and friends who have passed, or were bereaved following military conflicts.

This year, Mother’s Day fell on 8 May, the date that nine Ballarat servicemen were killed at Gallipoli in 1915.

Arch of Victory-Avenue of Honour committee president Garry Snowden spoke, remembering one of Ballarat North’s grieving mothers of World War One, Blanche Caley, who had sons Henry, Charles, and Thomas.

“Henry was a 20-year-old labourer when he enlisted in April, 1915… Blanche received a postcard from him dated August 5th telling her, that with many of his mates, he was aboard a ship approaching Gallipoli,” Mr Snowden said.

“The August offensive involved very intensive fighting and very heavy causalities… Blanche, like all mothers, would have anxiously checked the casualty lists in the newspapers.”

Mrs Caley received news that Henry had gone absent without leave in Egypt, hadn’t boarded the ship, and had likely run away.

She would have felt relief, believing he was safe, but also shame, knowing other mothers’ sons were dying at war.

In the meantime, her second and third sons Charles and Thomas were deployed to the Western Front, also having heard nothing of their eldest brother’s whereabouts.

“Around this time, Blanche moved to Melbourne… perhaps to move somewhere she could be anonymous, given the stigma associated with having a son who was a deserter,” Mr Snowden said.

However, in April 1919, one of Henry’s friends from the 14th Battalion told Mrs Caley her eldest boy had landed at Gallipoli.

A subsequent inquiry discovered the battalion’s early records had been lost, and he was not a deserter.

“More than six years after receiving his postcard, Blanche was advised that Henry was now officially listed as having been killed in action at Gallipoli in August, 1915.

“After six years of anxiety, uncertainty, shame and apprehension, tinged with just a little hope, Blanche was officially a grieving mother, so today we remember her,” Mr Snowden said.

Floral tributes were laid by community members at the memorial statue adjacent to the Arch of Victory, following poem readings from Loreto College co-captain Sophie Boyd, and Carol Holding, whose grandfather and great uncles are commemorated by trees along the Ballarat Avenue of Honour.

City of Ballarat mayor Cr Daniel Moloney thanked the Arch of Victory-Avenue of Honour committee for starting the local tradition of a Mother’s Day service three years ago, and recognised the uniquely special nature of the memorial garden.

“The Garden of the Grieving Mother is an acknowledgement of the trauma, grief and anxiety felt by the families of Australian servicemen and women, waiting for news of loved ones serving in times of war,” he said.

“Ballarat is proud to be one of the few municipalities in Australia that has a statue and a garden that invites and encourages reflection on the impacts that war has on families at home.

“The garden’s inspiration came from World War One, but is intended as a tribute to the mothers and families of all Australian men and women, and the life-size statue at its heart is a touching reminder of the grief during war times.”

Cr Moloney also acknowledged the war in Ukraine, those fighting, and its impact on mothers and families.