Blues likely no stress for Gordon 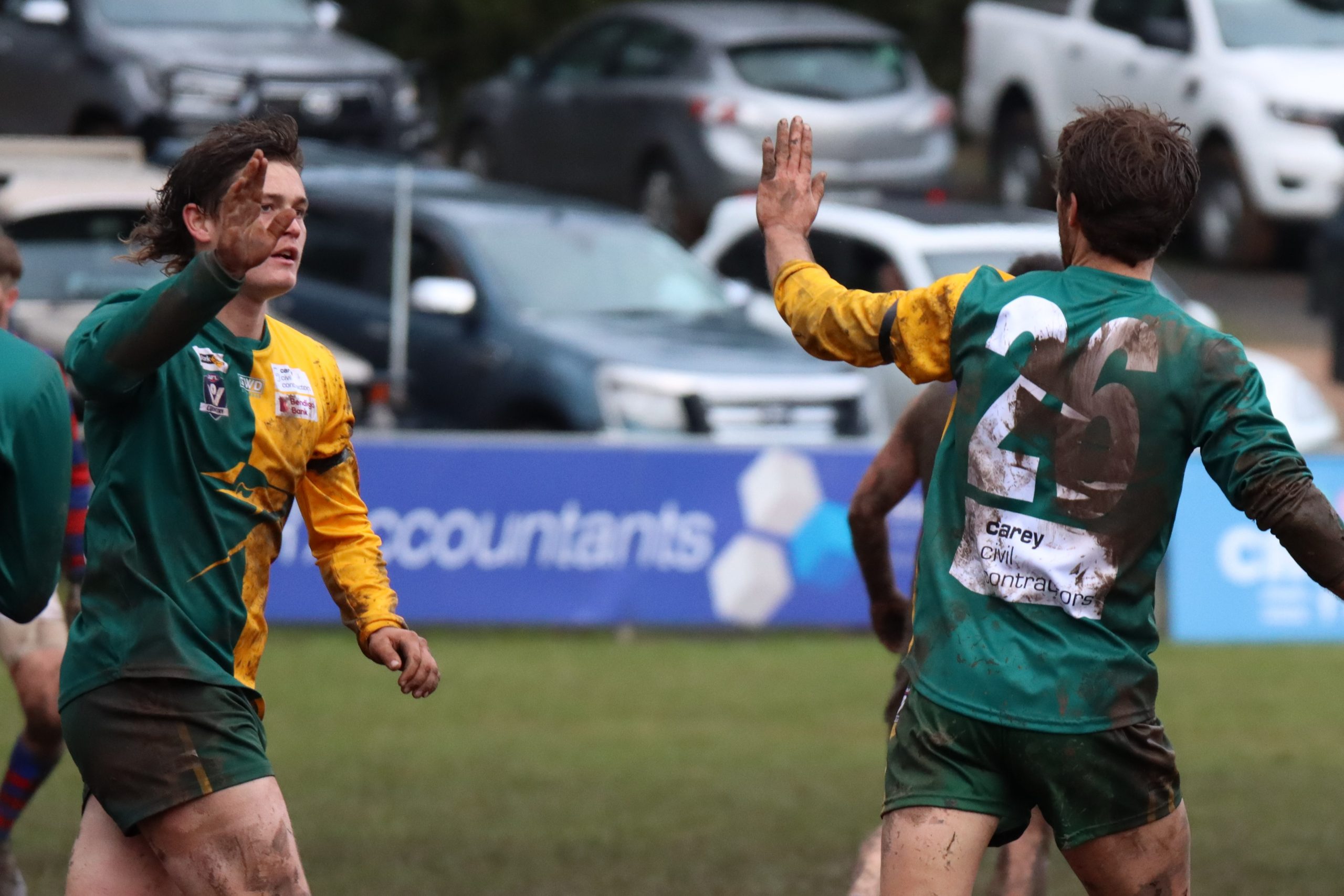 High-five: The Eagles are flying high in the CHFL and that looks to continue this week as they take on the struggling Ballan. Photo: FILE

Undefeated and with another heavy victory expected on the horizon in the Central Highlands Football League you can all but pencil the Eagles name on the minor premiership this year. With stars across the lineup, they are no doubt the team to beat and sorry Blues fans but it looks like you are in for a very long Saturday afternoon this weekend.

In sloppy conditions the Maggies shocked the footy world one more time with a come from behind victory over Newlyn last weekend. Matt Wrigley was adjudged best on ground with a goal from the defender capping off a brilliant day at the office. As expected, the Bombers were far too good for Ballan last week with this weekend a bit of test to see where they are at moment.

Prediction: Buninyong will get the job done.

Fresh off a huge victory at home against the top four placed Rokewood-Corindhap, the Towners will be feeling up about their chances to do some serious damage in on the road this week. The Wickers on the other hand got taught a lesson by flag favourites Gordon and will want to respond with a more solid performance against their home fans this weekend. Dunnstown impenetrable defence has become a focal point of coach, Glenn Wilkins, formula for success and expect them to keep the struggling Wickers to a low tally this weekend.

One of the inform sides in the competition and now just a single victory outside the top eight, the Tigers are really roaring towards a finals berth. Five wins in a row including a massive 57-point win over Learmonth last weekend showed the world that they mean serious business. The Bulldogs fell narrowly short against Bungaree, coughing up yet another three-quarter time lead in the process. They will no doubt take it up to the Tigers in this one but the class of Joel Mahar and Chris Quinlan on the outside may be too much to stop.

Prediction: Springbank continue on their roll.

No doubt the two biggest losers round 11 with the Lakies looking completely out of sorts at the minute and the Cats the definition of flat track bullies. Both sides had it all to play for last weekend with Learmonth getting absolutely belted by Springbank and with Newlyn unable to find enough class to get across the line against Clunes. Newlyn will walk in slight favourites in this one with their consistency to kick a score enough to sneak home here.

The Hoppers get a reprieve against the struggling Crows after Dunnstown burst their bubble last weekend. Missed opportunities in front of the big sticks continue to haunt them and this time it actually cost them the four points. Maybe the Hoppers will look to the experience of ex-AFL footballer Cam Richardson to lead the way inside forward 50 and get there kicking boots back on.

Prediction: Rokewood-Corindhap gets back to their winning ways in a big way.

A mathematical chance to sneak into the eight after this week, the Demons travel to Snake Valley with the all-important percentage boost needed against the competition cellar dwellers. Jacob Wertz, leading goalkicker John Butler and Bailey Veale were amongst the bets for the Demons in the tight win over Daylesford last weekend, watch that trio have a big say in a big win this Saturday afternoon.

Prediction: Bungaree in a landslide.

Match of the Round as the reigning premier’s host this season’s ever dangerous dark horse in the Emus, who are a big scalp to get their premiership push rolling. Andrew Pitson’s fantastic form continued last weekend with seven goals along with Jack Peeters booting five in a best on ground performance. The Roos come off the bye fresh and ready to cerement a top four spot, but they will worry about the exciting Hollywood footy the Emus have been able to produce over the last few rounds.

Prediction: Skipton in an upset.