OUR Men’s and Ladies’ Pennant players have been in full swing recently, with our men just completing their season. Our Division 2 team secured a great win in the last round of the season by toppling Anglesea 5/2, thus avoiding relegation. The Division 4 team had to wait until the games were completed on Sunday before their position was known as they had the bye. Unfortunately, the cards didn’t fall the right way, finishing in 3rd place and just missing the finals. The two teams above them had the same win/loss record as we did (six wins, two losses) but not enough individual wins. Ladies report next week.

Tuesday May 8: Men’s Stroke
No excuses today for the 140 men involved, with great conditions available to us all. Rob Parry had a freakish round of nett 64 to win the day and C Grade from Graeme Wren’s 72, Sam Beeston is enjoying his golfing comeback by leading A Grade with 65 on a countback from Rex Johnson, a 70 by Dennis Murphy got him the B Grade voucher by a shot from Leigh Wilson, and Bill Reid Snr headed the D Graders with 68 from Bill Randall’s 70. John Bowman, Linton Newitt and John Kennedy collected the NTP’s, and Matt Salter added to his collection of ProPins.

Wednesday May 9, Ladies Stableford
We had 66 ladies on the course for the day’s competition, and top of the bunch was the very consistent Joy Francis with 40 points, to also head the A Graders from Donna Utt with 35. Alison Kennedy also scored 40 to win B Grade by a point from Sue Watts, and Cheryl Johnstone’s 39 topped the C Graders from Val Carter’s 36. The NTP’s went to Marg Mascoll and Donna Utt, and the ProPins to Jacky Rowe (A) and Ann Watts (B).

Saturday May 12: Men’s and Ladies Stableford
After the course received a much-needed drenching over the previous 24 hours, and with some strong southerleys hitting the course, we were down a little on numbers with 137 men and 14 ladies participating. Well played by Brad Di Blasio, who put together 43 points to win Trophy of the Day and D Grade from Rhys Brown on 38. Chris Bellamy also played extremely well under the conditions with 42 to win C Grade from Jim Pyke’s 38, Mick Whyley topped B Grade with 36 by a point from Ian Francis, and Bob Gibbs was best A Grader with 39 from Justin McGrath’s 37. The NTP’s were scored by Eddie Legg, Brian Hazell and Col Isbel, and the ProPin by Derek Pringle. Karen Thomas headed the ladies with 35 from visiting neighbor Jen le Cerf from Clifton Springs, who carded 33. The pinshot went to Sandy Issell, and the ProPin to Joy Francis. 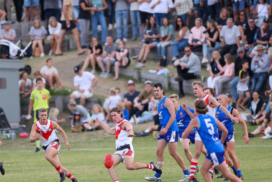 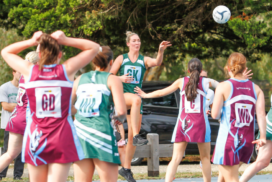 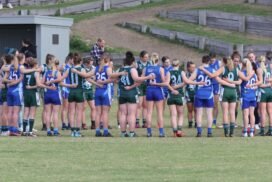