Rock up and play netball in Torquay Rock Up Netball has been delivered across 90 locations in Victoria, with more than 5,000 participants.

THE time is right for new or returning netballers to get back into netball in Torquay, with a new Rock Up Netball licensee signing on in the area. Torquay YMCA will offer a social competition to women in the area, targeted at those new to the sport, returning to netball, or who want to get involved in a less-serious competition.

The competition is run in a more relaxed setting than regular competitions, with no uniforms included and is an affordable option for those not looking to compete seriously.

Nina from Torquay YMCA said she was looking forward to incorporating Rock Up Netball into their community and welcome new people to netball.

Some Rock Up Netball participants have shared their thoughts on taking part:

Rock Up Netball is a Netball Victoria program, which was developed in conjunction with VicHealth in October 2015.

Since then, it has been delivered across 90 locations in Victoria, with more than 5,000 participants.

The Torquay competition will start at Torquay Coast Primary School in Stretton Drive on July 19 at 6.30pm.

For more information or to sign up to Rock Up Netball, head to rockupnetball.com.au or email Nina at [email protected] 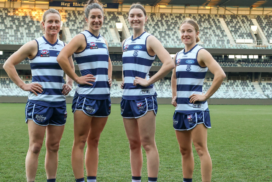