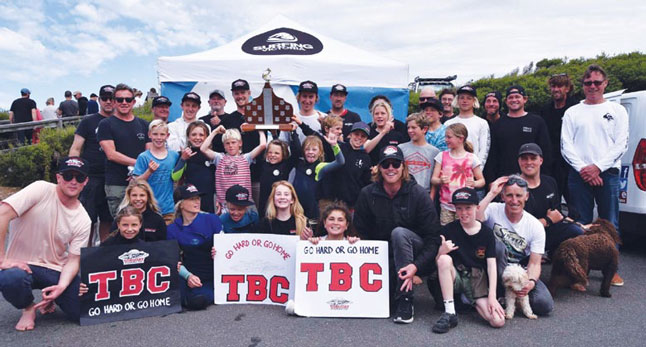 ON SUNDAY, the Victorian Team Titles for surfing were held at Jan Juc in two-foot summer conditions.

Boardrider clubs from all over Victoria took to the surf to battle it out for the coveted title of State Champions.

Competing as returning champions in both the open and junior events, the Torquay Boardriders Club (TBC) members were focused on giving this event their best efforts.

The TBC blistered through the first semifinal with a convincing win, notable performances going to Harry Mann and Damien Wilson.

TBC then progressed to the final, where they faced some fierce competition in Jan Juc Boardriders, 13th Beach Boardriders and Phillip Island Boardriders.

As per the rules of Team Titles, one power surfer can double a wave score for each team. Cody Robinson was TBC’s power surfer and doubled an 8.67 in the final, which kicked TBC into the lead.

The final was a hard-fought contest. With a streak of seven consecutive titles coming in to the event, TBC were keen to claim their eighth victory in a row.

Separated by less than one point, the tight finish saw TBC taking the win from Phillip Island.

The Junior Team Challenge was also held on Sunday. The TBC junior team consisted of Jack Kay, Indi White, Noah Clifford and Angela Ball. For the second year this team also took the win in their division.

TBC president Cahill Bell-Warren said at the trophy ceremony that this year and last year had been two very close events.

“It’s exciting to see the depth Victorian clubs have and for us to see the juniors get the job done is exciting as we spend a lot of time and effort in our junior development. We’re very proud to say that we are the only state in the country to have two Australian Junior Champions. Congratulations to all other teams.”

Congratulations to all the teams that formed squads across the day. It was fantastic to see so many of our valued members and TBC family there on the beach to rally the teams home to victory.

TBC will now compete in the The nudie Australian Boardriders Battle State Qualifying Round at Phillip Island on December 9 to qualify to compete in the National Final on February 16-18, 2018 on Newcastle Beach in New South Wales.