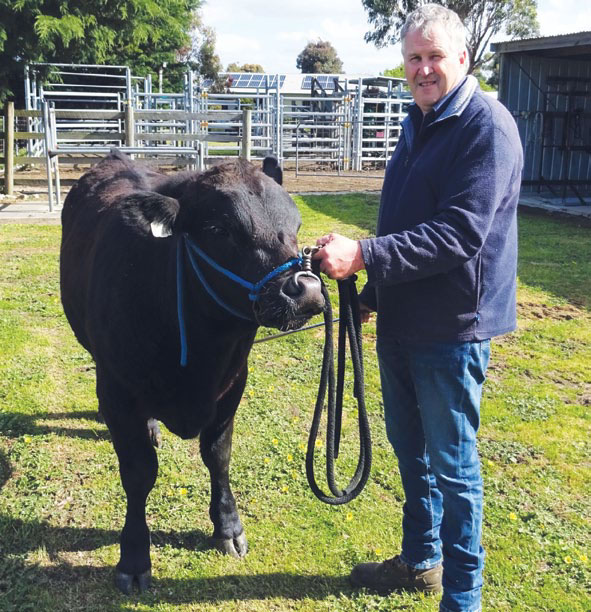 WITH the Royal Geelong Show starting this week, agriculture remains a strong focus with a variety of farm animals presented, both for competition and viewing.

Winchelsea farmer and Angus breeder Peter Arundell, whose passion for breeding cattle has resulted in a long history of showing cattle, will be a hot contender in the Angus Bull Competition this weekend at the Royal Geelong Show.

Peter will be presenting his prime Angus bull, Arundell Mick, in the under 12 months category.

Bred from Millah Murrah Kingdom – Australia’s highest priced bull, which made $150,000 at the annual Bathurst Bull Sale – Arundell Mick is in good stead to do well in the competition.

Showing cattle since 1976 originally from the Camperdown district, Peter moved to his Winchelsea farm in 2002 and began showing Angus cattle from 2005.

“It gives me great pleasure to show these delightful animals, whom I have put a great deal of time and care into,” Mr Arundell said.

“Breeding quality cattle takes the long view and a lot of time, skill and patience, but the end result is well worth it.

“I pride myself in ensuring that my cattle handled quietly with low stress, this both helps animal behaviour and weight gain, it also makes them so easy and safe to work with.”

He said characteristics he looked to breed into his cattle were a good stretched frame and good feet, as well as high weight gain.

Beef judging classes will be held on Sunday from 9.30am followed by the Beef Cattle Interbreed at 2pm.

For those interested in dairy cattle, judging junior classes will be on Thursday from 1pm.

The Junior Dairy Classic Show, a first for the show, with 31 head entered is scheduled for about 3.30pm. The Champion of this class walks away with $1,000 prize money proudly sponsored by Geelong Rural.

Dairy in milk classes are Friday from 8.30am followed by the Dairy Interbreed at 11am.