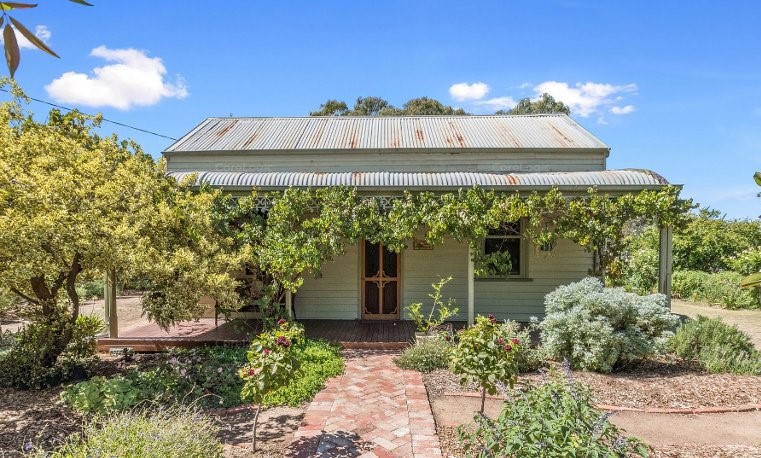 This wonderfully historic Marong miner’s cottage built in the 1900s on just over three acres sold recently for $745,000

The size of Marong is approximately 76.1 square kilometres and has one park covering nearly 0.1% of total area.

Marong is a rural township on the Calder Highway, 13 kilometres west of Bendigo and was also the administrative centre of Marong Shire and rural city from 1908 until 1994.

It is thought that the name was derived from an Aboriginal word meaning a native or Murray pine tree.

Although set in the gold fields region, Marong was not a gold town, being situated on Bullocks Creek, it became a gold-washing place and Commissioners’ camp in 1852.

Gold discoveries occurred in the vicinity of Marong in 1853, but the significant discovery was Wilsons Reef in 1867 about four kilometres eastwards.

Mining and cereal growing were the district’s main activities and there were about 60 hectares of vineyards.

Marong’s position on the railway line and highway preserved it from decline, whereas some former gold mining villages are marked by ruins.

In 1908 the Marong Shire offices were transferred from Lockwood to Marong.

Marong’s highway location and proximity to Bendigo have contributed some residential growth to the township.

CoreLogic data indicates that the predominant age group in Marong is 0-9 years with households being primarily couples with children and are likely to be repaying $1400 – $1799 per month on mortgages. In general, people in Marong work in a trades occupation.

“Marong is currently sitting as one of Bendigo’s higher growth areas for property and has the luxury of providing buyers with larger block sizes than the average 500-squaere-metre blocks in the more urban areas of Bendigo.

“With easy access to the Calder Highway via the Calder alternate, Melbourne is an easy drive which sees a large number of metropolitan buyers coming into the area.

“The prices being achieved by vendors in the Marong area in the current market have blown me away with the majority of houses selling above asking price.

“We are seeing this due to the competitive nature of the area with buyers looking for that ‘tree change’.

“The pandemic has given people the opportunity to re-evaluate their work-life balance and we see this being converted into sales in the Marong area.

“This coupled with all the things Marong has to offer such as pre-school, primary school, medical practice, golf club and numerous play spaces is why we are seeing over 70 per cent occupancy by families in the area.”

In 1876 the Marong railway station was opened on the line from Bendigo to Inglewood.