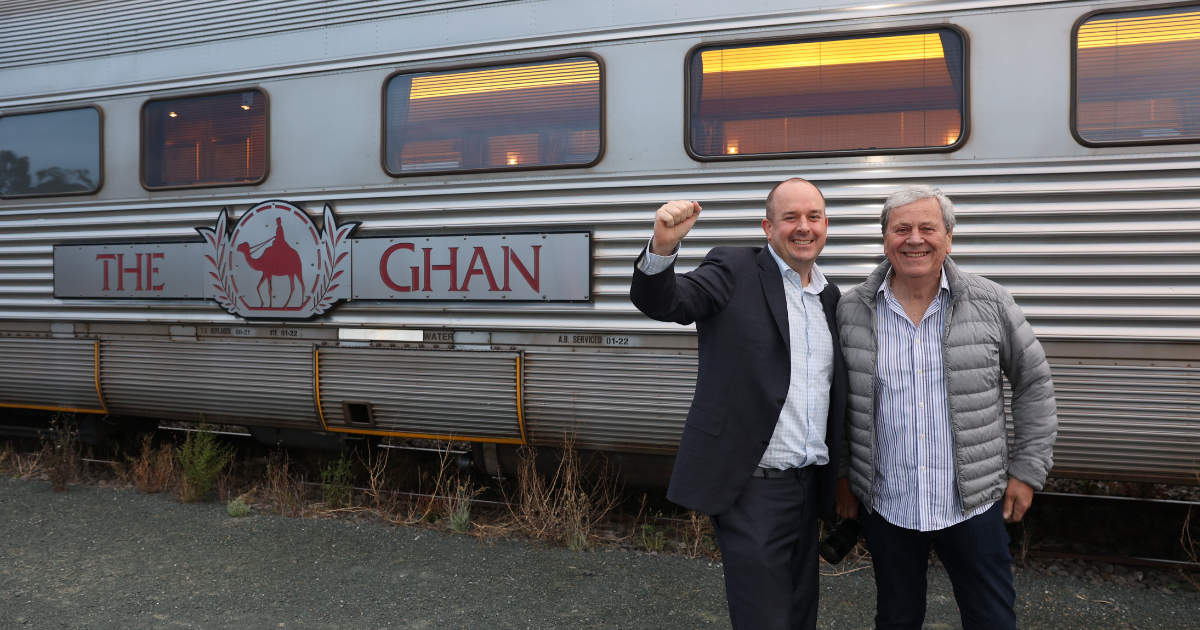 “The train is my greatest achievement in 30 years” Geelong Travel’s Stuart Coffield (left) said, farewelling The Ghan on its inaugural trip from Inverleigh Station to Darwin on Tuesday night with 230 passengers, inlcuding Ray Martin, on board. Photo's: ANDY ROGERS

FACED with the closure of his 30-year old travel business due to the pandemic, Geelong’s Stuart Coffield decided to “think outside the box” and reach out to the operators of Australia’s most famous rail journey, The Ghan, to see if they would consider bringing the train to Victoria.

“Put simply, I had to think of something to survive, it’s been very, very difficult due to COVID,” Mr Coffield said, prior to the train’s first ever departure from Inverleigh station on Tuesday night, on a four-night journey via Adelaide and the red centre to Darwin, with 230 passengers on board.

“The train is my greatest achievement in 30 years, keeping eight staff employed during lockdown.”

Prior to the pandemic, Mr Coffield employed 20 staff, but as borders closed and bookings fell off a cliff he embarked on what would become six months of negotiation with Journey Beyond, owners of the train.

“It’s been in the pipeline for nearly a year … flying over to Adelaide between restrictions. After six months they agreed to a $500,000 deposit … agreed to give me a charter out of Geelong, the first time it’s ever been done.”

Running the train out of Melbourne was considered, as it once did decades ago, but Mr Coffield said there were too many barriers to overcome.

“We couldn’t take it out of Melbourne because it’s too long, 1km, for Flinders or Southern Cross, that’s why we’re doing it at Inverleigh, it’s the straightest part of track from Geelong to Adelaide.”

When the route was finally secured and he could finally start selling tickets, they were gone in a week.

“It feels like we’re living again, growing and doing things,” he said.

It’s also been a chance to showcase the region, many of the 240 passengers who came from every state and territory in the country had a pre-trip tipple at Bannockburn winery Clyde Park.

From Inverleigh, passengers travelled overnight to Adelaide, where on Wednesday morning many headed to the Adelaide Oval for an exclusive breakfast, a grandstand climb and talk from media personality Ray Martin, who’ll be accompanying guests on the inaugural charter.

Mr Coffield hopes it’s the first of many journeys to come.

“We’re trying to do more, have got meetings with owners to have discussions about further charters. We’re having a go, coming out the other side.”