Bree Gorman was a weapon with the bat hitting for 51 runs off 30 balls in South Barwon's 16-run win over Collendina. Photos: MARCEL BERENS/SPORTS MEDIA IMAGES

SOUTH Barwon Reserve was jam-packed with local cricket Sunday afternoon as six clubs banded together for the common goal of increasing LGBTQI+ visibility and engagement around the game they all love.

Prior to play, teams gathered for a Welcome to Country ceremony, speeches, drag queen appearances and were treated to an exhilarating roar around the ground thanks to a convoy of motorcycles.

The festive atmosphere at the reserve was noticeable as pride colours could be seen on the pavilion, on the players’ uniforms and even MP Andy Meddick’s pants during the Curtain Raiser Match between English and Australian representatives.

“It was such a great day,” co-organiser and Collendina player Jen Walsh said.

“I think by the end of it neither team really cared whether they won or loss, it was just such an inclusive space.

“There were people out here in their 70s who decided to come out and watch some sport, as well as a few non-binary kids, which highlights a part of this mission to make more people feel more welcome at their sporting clubs.”

Following the pre-game proceedings, it was time for the first ball across all three ovals.
South Barwon and Collendina headlined the day on Reynolds Oval vying to get their hands on the Pride Cup.

Bree Gorman, a gender diverse person, as they have done all season, led from the front with 51 runs of 30 balls before being retired for not out.

It was clear to see Gorman was ready to put on a good performance as they too were an organiser on the day, a day it is safe to say they will remember for a very long time.

“For me personally, it has been just such an incredible experience for me to know that I can not only play cricket in the first place because it wasn’t available to me as a child,” Gorman said, “but to also be able to take part in a game that is celebrating LGBTIQA+ people and our participation and our contributions to sport and the community just brings me a hell of a lot of emotion.”

Collendina attempted to chase down South Barwon’s 135-run total, but some decent bowling by Molly Whitney and her two wickets coupled with Gorman’s light-hearted runout of Walsh held Collendina to just 119 by the end of the 20th over, securing the win for the Swans. 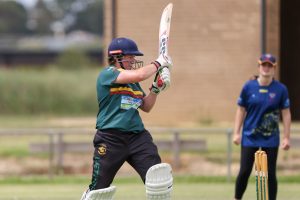 Meanwhile, Lara managed to chase down North Geelong’s 5/99 and get the win in just under 16 overs on Oval 3 to round out the day’s action. 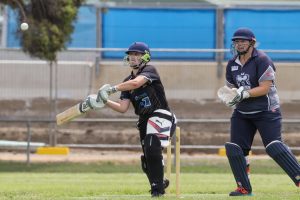 Both South Barwon and Collendina will look to recreate the event during the 2022/23 cricket campaign.