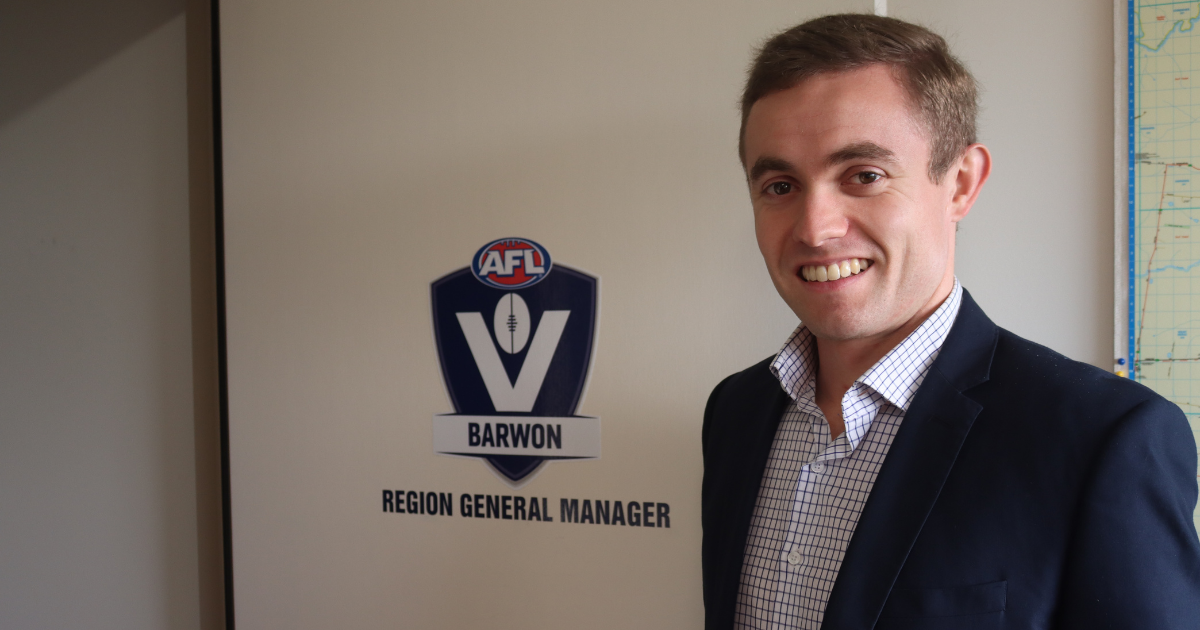 FINALS venues, junior engagement, mental health, and league amalgamations are all on the table for AFL Barwon’s new boss, with some of these topics to be addressed in the coming days and weeks.

Edward Wilson was appointed as AFL Barwon’s new regional manager following Bruce Harwood’s sudden departure from the role, but in the week and a half Wilson has been in the seat, he has received warm and positive welcomes.

“The opportunity to work here at AFL Barwon has humbled me greatly and I am aware of the massive shoes to fill,” Wilson said.

“It’s been very positive since I’ve begun the role and people have been very welcoming in the conversations we have had.

“Coming in mid-season, there is a lot that needs to be done in terms of outstanding queries such as finals venues and the like.

“But I’ve been fortunate enough to have spoken to a couple of clubs last week in pushing towards a final decision on this matter in particular.”

Wilson has put a large emphasis on creating a new Strategic Plan for AFL Barwon, which was already under way prior to the start of the pandemic.

However, with Wilson coming in, he will seek to complete a new plan in the next three to six months to try to address some of the long-term objectives of the sporting body.

Wilson said his background in sports management at organisations such as Touch Rugby League Australia, Tennis Australia and the Commonwealth Games will give him an advantage in managing a vast area like the Barwon region.

“One particular role I had was being general manager of franchises, business development and events at Touch Rugby League Australia, and during that tenure I was fortunate to lead 13 franchises based across the country,” he said.

“That was a pivotal role where I could improve my own personal aptitude, and it allowed me to develop to a point where I could influence the way we ran the sport across the country, but also work in collaboration with those clubs to get the best outcome for their regions.

“These roles in terms of managing a large geographical responsibility I have done before, and I hope to emulate that here again at AFL Barwon.”

Mental health is another issue high up on Wilson’s agenda and will also be addressed in AFL Barwon’s new strategic plan.

Following two turbulent years in which sporting codes could not complete a full campaign, Wilson said the topic is one he will focus heavily and personally on, using AFL Barwon’s recently released Mentally Healthy Sporting Clubs Framework as a pivotal tool.

“Mental health is crucial in the way of community at the moment,” Wilson said.

“We’ve seen the economic and physical impacts of the pandemic, especially in Victoria.

“This will be a grave concern here for a very long time and at AFL Barwon we believe we will play a pivotal role in not just player welfare but also the welfare of all community members at
our clubs.”

Wilson is expected to meet with GDFNL boss Neville Whitley in July.