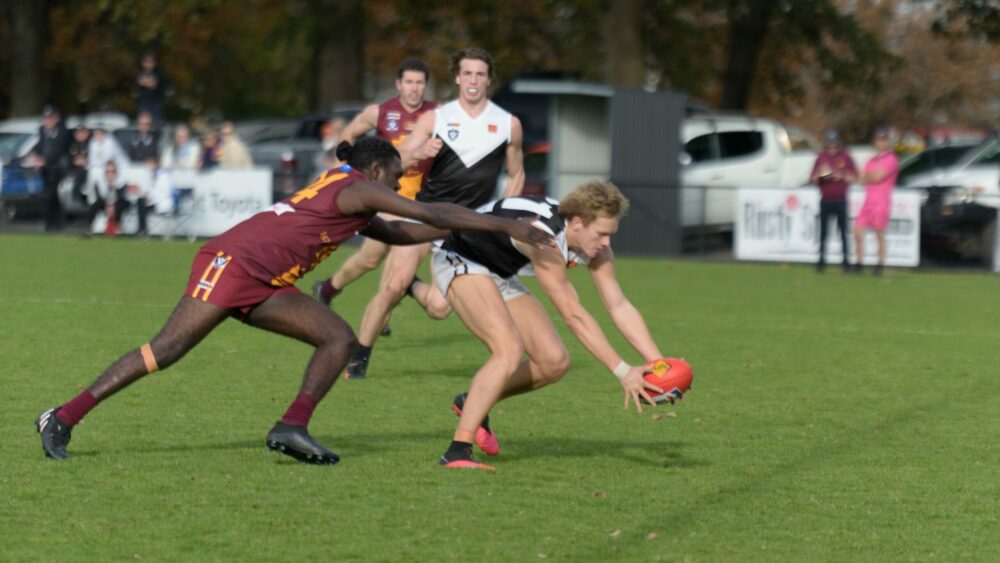 Hands on: Clayton Tipiloura, who had goal in his debut for the Lions, and North Ballarat’s Maxwell Tate seek ball control in Redan’s forward 50. Photo: RAY EDWARDS

IN a nail-biting contest, Redan has announced themselves as potential finals contenders in the McDonalds Ballarat Football League with an upset three-point victory at the City Oval.

It was the Lions first home win this season with Izaac Grant the star of the show with five goals in a close to best on ground performance.

City Oval was bathed in sunshine for a cold but perfect afternoon for football, and with the sides placed sixth and seventh it was always going to be a tight tussle.

As expected, the game started in a shootout fashion with 10 goals in the opening term and both sides maximising the corridor as the shortest avenue to goal.

Pat Fitzgibbon the catalyst for the home side with his running effort one of the best goals thus far this season, but also ensuring a slender two-point lead at the first break.

The next two quarters turned into an arm-wrestle with Redan not making the most of their chances despite the class of captain Lachie George and VFL-listed player Craig Cooper-Peters flexing their muscles through the midfield.

Redan made it a game-high 37-point margin in the later stages of the third term through goals to Grant and debutant Clayton Tipiloura.

The latter, in his first game back from the Tiwi Islands, showcased glimpses of what he can add to the Lions forward line, and also maybe Redan’s depleted ruck stocks once match he’s fit.

However, North Ballarat failed to go away and at the 27-minute mark before the final break, Liam Wood and Fletcher Loader scored back-to-back goals to give Brendan MacCartney’s men a sliver of hope.

With no Nathan Dunstan for the Lions the visitors were always going to have ascendency in the ruck and in the final quarter it began to count with Cam MacCullum and Jonathan O’Brien getting on top to set up the likes of Jack Riding inside forward 50.

Riding had the chance to pinch victory in the dying moments with his late set shot falling short of the goalmouth and resulting in Declan Phillips laying a goal saving tackle five metres out from defensive goal to secure victory for the home side.

Despite the loss, North Ballarat move to fifth on the ladder due to a superior percentage after Darley fell to East Point.

Redan remains in seventh but now equal on points with the Roosters, Devils and Cobras. 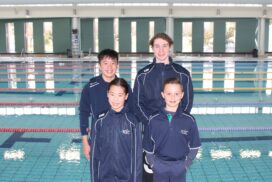 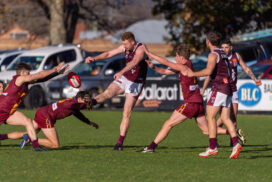 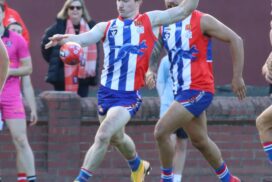