The introduction of Matthew Stokes to the Eagles nest is just another string to their bow as they remain undefeated in the Central Highlands Football League.

Not having lost a game since 2019 Gordon travel to take on the struggling Cats who just seem off the pace this year.

Marcus Darmody booted four of his side six goals on the weekend with a big bag required from the competition’s superboot if Newlyn want to cause the upset of the season to date.

It was another tough weekend in the Saints camp falling short against Beaufort in blustery conditions.

Again, last year’s club best and fairest Kynan Raven was the standout in the loss for the Saints but seems he is playing a lone hand at the minute as Carngham-Linton continue to struggle in.

Bungaree come fresh off a bye and the Demons know if they don’t walk away with the easy four points here it is curtains on their season 2022 campaign.

Two in a row and eyeing a third the Crows make the trip to the Doug Lindsey Reserve where they are hosted by the winless Wickers.

Creswick’s abysmal start to the season was further enhanced by a 129-point loss to flag fancies Springbank last round, with many pundits wondering where to go from here for the Wickers.

Top of the table plays the bottom with the Tigers expected to run riot over competition cellar dwellers Ballan this weekend.

Stephen Stauton returned for the home side last week kicking eight majors and will be eying another big output in this one as Springbank firms as one of the sides to beat in season 2022.

Prediction: Springbank in a landslide.

To the struggling Doggies credit, they held in there for the opening half against the much more fancied Skipton last weekend, with a bit of respectability on the scoreboard fading away after the major break.

They host the Hoppers in what on paper sees it to be a one-sided affair but there will be plenty positives out of the loss last week in the Bulldogs camp that they can match any side at the coalface when conditions get a little greasier.

Match of the Round in the Central Highlands Football League as two of the competition’s dark horses for this season’s premiership in Dunnstown and Skipton go to battle in a mouth-watering clash this Saturday afternoon.

The Towners had it their own way last weekend in a comprehensive victory over Clunes whereas the Emus had to battle hard to get across the line against Daylesford.

It is a contrast of styles in this one with the Towners known for a more methodical approach with ball in hand as they try and pick their way through the defence at any given opportunity.

On the flipside Skipton just back their own system in with a high-risk verses reward mentality with the gut run from the likes of Sam Romeril even more important in this one.

This could be decided by the smallest of margins with the home field advantage maybe enough for pundits to see Dunnstown the slight favourites here.

Prediction: Dunnstown in a tight one.

A seven goal to two second term was the difference in the Lakies clash with Hepburn last weekend as both these sides go into this one off the back of losses.

This game will have major ramification on the league’s top eight with victory cementing either side’s position in the good side of the table.

Last year it was the Magpies who snuck across the line in their fairytale run with maybe that on the minds of Learmonth, acting as a catalyst for some revenge if you will.

Still winless in season 2022 the Roos see this game as a do or die clash hosting the much more fancied Burra this weekend.

They hung in there against flag favourites Gordon last weekend with James Lukich, Darcy Jenkins and Brandon Green amongst their best despite defeat.

The ex-AFL footballer was always going to be handful for sides in the Central Highlands Football League and it will be down to limiting his supply if Waubra want to be any chance of getting on the winner’s list.

Prediction: Hepburn in a close one. 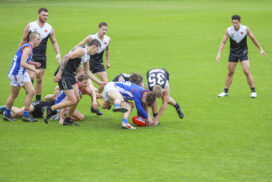 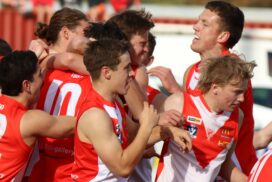 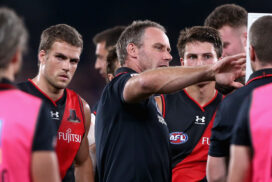 ESSENDON legend Tim Watson believes the Bombers do not need…