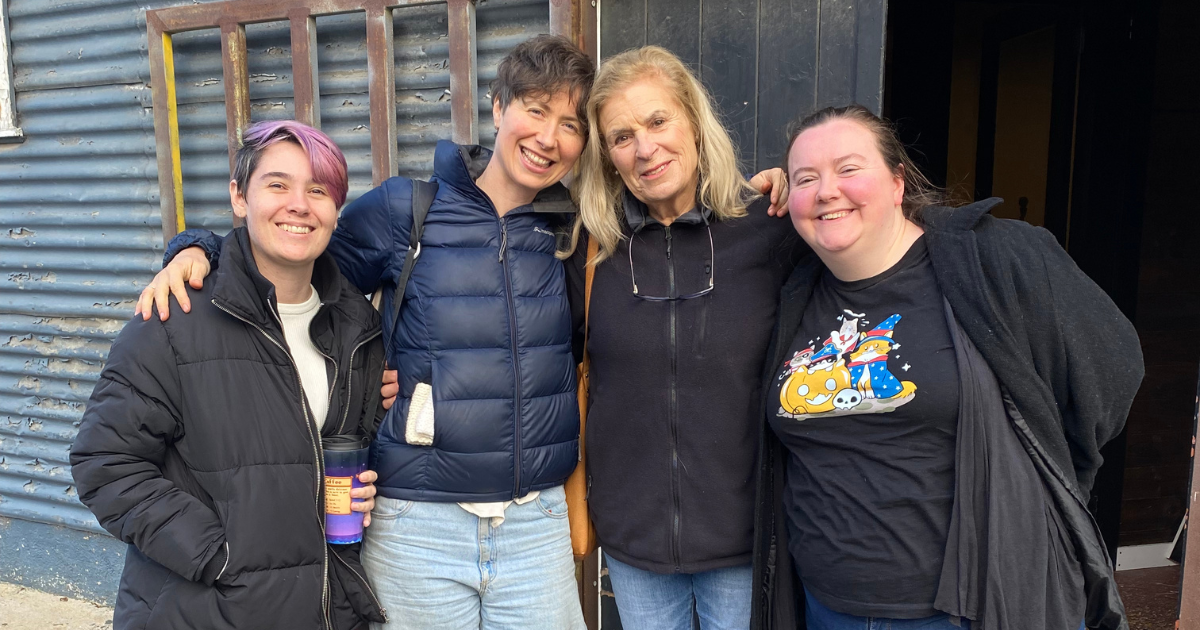 The night before Halloween 1938, voices echoed out over the radio with an audio rendition of H. G. Wells’ The War of the Worlds – a series of theatrical bulletins describing Martians invading New Jersey.

The radio play thrust 23-year-old Orson Welles and his amateur theatre company Mercury Theatre on the Air, and the power of audio theatre, into the spotlight.

Sixty years on, radio theatre has fallen out of fashion in the face of television, the internet, and streaming services, but young Geelong-based director Jo Lusty is making it her mission to bring radio dramas back to centre stage.

Jo grew up in a little town in NSW she’s sure no one would have heard of, Tenterfield, and her interest in audio began at the local community radio station.

“It was in a tiny town and the local radio station had two microphones and that was it,” Jo said.

But she loved it and her spark for audio had been ignited.

“It was so popular for a long time because it fulfils our love of storytelling, creating and listening, and on top of that it makes stories accessible to a larger audience who may not be able to attend live theatre,” Jo said.

“I think my mission with it is to make audio productions appeal to a modern audience by creating high quality, immersive worlds and explore the stories within them.

“I went on and studied acting in Armidale, NSW and then came down to Victoria.”

Jo moved to Geelong for its budding arts scene, where she met Gracie Rodgers and Ryan O’Conner, and the three co-founded Someone New Theatre company.

“We all studied and trained in theatre, and we wanted to start giving actors more paid opportunities. So, we founded Someone New Theatre Company as a way to start paying actors properly.”

That was when Jo met Louise Watson.

“It was originally her idea to bring back that sort of War of the Worlds radio play style,” Jo said.

Louise had been working on bringing back radio plays to Geelong’s arts scene for years, even founding the Theatia Podsie radio theatre festival in 2019.

Louise brought Jo and the Someone New company on board to direct the audio plays for the Theatia Podsie and learn the ropes last year, but with so much on her creative plate already, she passed on the dream to revive radio play to Someone New Theatre Company.

“I think my mission with it is to make audio productions appeal to a modern audience by creating high quality, immersive worlds and explore the stories within them.

“A lot of radio stations now don’t have the capacity to record those things live like they used to. Like wobbling a piece of tin for thunder sound effect and all that. But in the modern day we have all this technology, so we can pretty much record it and give it to radio stations and bring back that radio drama that we haven’t really had for 50 years.

“I think immersion into a story is really important. Especially when you can’t see the actors and you can’t see the setting you have to make the imagination do the work and that’s the really beautiful thing about radio plays.”

Over the past few years, Someone New has helped direct numerous radio plays through COVID lockdowns, including a few sci-fi radio plays, a fantasy, an Australian drama and the first 12 stories in the Sherlock Holmes series.

Jo, Gracie and Ryan directed the Sherlock Holmes series during lockdowns with around 50 actors from across Australia creating the play from a distance.

“The actors would all send in their lines and we would mash it together with the sound effects and actor’s lines. That was a huge project.”

“We thought it was going to be some small undiscovered project, but it was really well received; people really liked it.”

This year, Jo directed two plays for the radio play festival Theatia Podsie, produced by Someone New Theatre Company. The project received an arts, heritage and cultural grant from the City of Greater Geelong.

The festival featured the reading of two works by Victorian playwrights: Like Me by Glenn Saunders and Turbulence by Megan J. Reidl.

Both radio dramas are set in rural Victoria, exploring the common themes of death, love, truth, subjectivity and friendship.

“The live reading part of the performance was the first time we’ve ever tried this sort of thing as a company,” Jo said.

“It went really well. It was mellow, happy and I think people we just overjoyed to be back and able to watch something live and something different, with new stories and get a little sneak peek into what it’s like to have a play with no movement and no costumes, it’s just a different experience. I think people were curious but they left happy.”

“It’s always stressful setting up, you do get those nerves thinking ‘how’s it going to go’, but a bit like that, and I think the nerves are good though, it means you care about it.”

One week after the live performance, Jo directed the studio recording of the radio plays at Pivot City Music in Geelong.

Once the recording is edited and sound effects added, Someone New will pitch the plays to local radio stations before releasing on streaming platforms to be available to everyone, nationally and internationally.

But this is just the beginning for Someone New.

Jo said the plan over the next few years was to get more companies involved and grow the Theatia Podsie into a collaborative radio play festival.

“There are so many great local theatre companies and I really just want to see them come together for a big event.”

Jo said she and the Someone New team hope in 10 years’ time they are running radio plays in a thriving Geelong arts scene and even touring audio theatre regionally.

“That’s the goal, so we can all share in the benefits of a radio festival.”