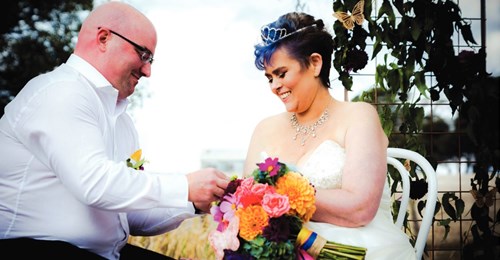 Plains and Surf Coast residents, who provided A MEREDITH bride with terminal cancer was given her dream wedding at the weekend, thanks to the generosity of family, friends and strangers.
Mandy and John Brockway were married on and labour.
Mandy was diagnosed with bowel cancer in June 2014 and has been undergoing a series of surgeries since, however, she has been told the cancer is terminal.
She recently expressed that it was her greatest wish to marry John, and within two weeks she was walking down the aisle.
More than 100 businesses and individuals contributed services and goods for the wedding, including cakes, equipment, wedding hire services, Friend and Torquay resident Gail Smaniotto coordinated much of the event and said she wanted to thank everyone who assisted in bringing the day together.
“The support was fabulous, really phenomenal. It was incredible actually and I can’t thank everyone enough.
“People from all over Golden Plains and the Surf Coast pitched in, so many more than we could have expected. hairdressing services and more.
“Everything was covered. We ended up with food for about 200-300 people, I couldn’t believe it.
“Most importantly, Mandy and John were so overwhelmed and so happy. It was perfect.”