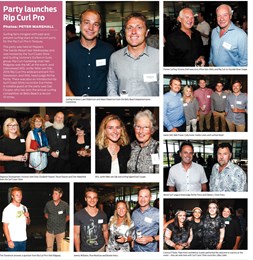 Surfing fans mingled with past and present surfing stars at the launch party for the Rip Curl Pro in Torquay. The party was held at Peppers The Sands Resort last Wednesday and was hosted by the Surf Coast Shire and Surfing Victoria’s Surfers In Suits group. Rip Curl marketing chair Neil Ridgway was the MC at the event, and interviewed WSL surfer Nikki van Dijk, 2016 Rip Curl Pro wildcard entrant Tim Stevenson, and WSL head judge Richie Porta. There was also an introduction by Surf Coast Shire councillor Eve Fisher. A notable guest at the party was Gail Couper, who has won the annual surfing competition at Bells Beach a record 10 times.