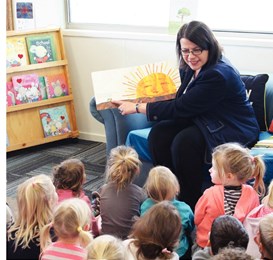 CHILDREN at a Torquay kindergarten had a special guest last week to encourage them to join the Premier’s Reading Challenge for the Early Years.
Minister for Families and Children Jenny Mikakos visited Torquay Early Learning Centre to launch the initiative, and read Eric Carle’s The Very Hungry Caterpillar to some of the boys and girls.
She also added to the centre’s library, gifting copies of Where is the Green Sheep?, How Big is Too Small?, Davy and the Duckling, and Max.
The state government is asking parents and carers of young children to take part in the Premiers’ Reading Challenge for the Early Years and read to their children to set them up for success in later life. The Early Years challenge aims to draw attention to the added benefits of reading to children from the day they’re brought home from the hospital.
“We’ve heard some parents think as their children don’t talk, there’s no need to read to them but they’re like sponges when they’re young,” Ms Mikakos said.
“When families read with their children, it not only fosters strong relationships with the most important people in their lives, but also a love of reading that we know has long term benefits”. Dr Patricia Eadie, from the University of Melbourne’s Melbourne Graduate School of Education, said the recently-released Early Language in Victoria Study showed that what parents did mattered enormously for development of their children’s language skills, early literacy skills such as knowledge about letters and the alphabet, and eventual reading and spelling skills. This year, the state government has introduced a new competition to encourage more preschoolers to enter the challenge. Kindergartens and childcare centres can sign up for an opportunity to win one of two visits from Jimmy Giggle from ABC KIDS’ Giggle and Hoot.
For more information, head to education.vic.gov.au and click on the “Premier’s Reading Challenge” banner.