REWRITING HISTORY WITH A MYSTERY 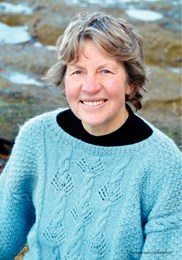 Through a Camel’s Eye recounts, in part, a local legend about the theft of a circus camel from near the Point Lonsdale Surf Club in 1957.
As the story goes, the camel was loosely tethered by a rope near the stairs of the surf club, and with a dose of Dutch courage, a group of young men whisked it away – all the way to Ocean Grove. Dorothy remembers hearing this story in the 60s, when the Geelong-born author holidayed regularly in Point Lonsdale, and it returned to her when she moved to Ocean Grove from Canberra in 2008. It became the opening for her sea change, murder-mystery novel, which explores small town traditions, contrasting an idyllic setting with the gravity of murder and features comic relief from a bunch of schoolboys. It’s the first in a series of three “sea change” novels, and Dorothy said she enjoyed bringing the region to life in a new light, and revisiting her childhood memories.
“I feel so intimately connected with the place and the land here and I don’t have to go looking for inspiration so it’s a wonderful place to be for me as a writer.
“I used to love walking barefoot around the surf club, working in the milk bar in the 60s and exploring the area – it was a much smaller township then, but it’s still such a beautiful place.”
Through a Camel’s Eye is not Dorothy’s first foray into the crime genre.
She has written a quartet of mysteries set in Canberra and the first of these, The Trojan Dog, was joint winner ACT Book of the Year.
Two of her literary novels, One for the Master and Ruth, have been shortlisted for the Miles Franklin award and she has also published short stories in journals and anthologies. Dorothy said throughout her career, her style of writing has been disorganised and unconventional, but something she takes great pleasure in.
“Writing for me is such wonderful fun. I’m not a planner – I don’t know what’s going to happen to the characters, what they will say or how they will react.
“The characters live in my head – that might sound strange but they do – and I don’t know what they’ll do, they develop as the time goes on.
“It’s a funny way to work, a lot of people would hate it but I love it, it’s an adventure.”
Dorothy Johnston is appearing at The Conservatory at Vue Grand, thanks to The Bookshop at Queenscliff on Saturday April 23 from 4pm, entry is free.
To book, email [email protected] or phone 5258 4496.
For more information about Dorothy and her books, head to dorothyjohnston.com.au.