Wuthering Heights to storm the stage 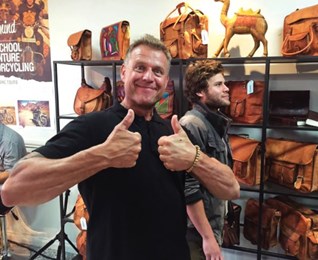 A Gothic literary gem will stir up a storm in Geelong this month when the stage rendition of Wuthering Heights comes to GPAC.
Based on the Emily Bronte classic novel, Wuthering Heights is filled with high drama, romance and action, and is bolstered by a stunning set and talented cast.
The story follows Heathcliff, a mysterious boy who is rescued from the street and brought to Wuthering Heights, where he develops a passionate bond storm the stage with Catherine Earnshaw.
As time passes, Heathcliff and Catherine’s relationship deepens to the point of dangerous obsession, until one day, Catherine marries another man.
Overcome with jealousy, Heathcliff flees the Heights only to return, years later, ready to exact revenge on those he believed ruined his one chance at happiness.
Wuthering Heights has already mesmerised audiences, playing a sold out season at the Queensland Performing Arts Centre and garnering stellar reviews.
Artistic director Nick Skubij, who adapted and directed this bold new work said “Aside from being an outstanding story of revenge, love and loss, we chose Wuthering Heights to… invigorate classics for a new audience. “Theatrically we are also pushing the boundaries and thanks to our esteemed design team Wuthering Heights will surprise and shock in all the right ways – we are literally bringing the natural elements into theatre.”
Wuthering Heights is presented by Shake and Stir Theatre Co and Queensland Performing Arts Centre as part of GPAC’s Deakin University Theatre Season.
See the saga live on stage GPAC’s Playhouse Theatre from April 14-16.
For more information and bookings, head to gpac.org.au.