NORTH Torquay residents are becoming increasingly frustrated at their backroad street being treated as a garbage tip, with piles of hard rubbish and green waste continually appearing on the roadside.

Residents of Blackgate Road reached a tipping point last week, when at least three different trash dumps happened in the space of about two hours.

Local man David Dennis, who lives in the area, was among the residents to share their anger online.

“It’s frustrating how filthy people are,” he said.

“They won’t dump it on their own curbs, they’ll come and dump it on ours. It just shows no respect.”

Mr Dennis said that the quiet backroads had been a common dumping ground for several years for local litterbugs, but the concentrated incidence pointed to increasing regularity of the irritating behaviour.

“This one was rather cheeky because it’s virtually outside my front gate and in full view of my neighbour. They normally like to go a bit further, towards Ghazeepore Road and the Anglesea Road,” he said.

“They just pull up, chuck stuff off and keep going.

“The real nuisance is that these are our shire rates that are paying for people to go along and pick it all up again.” 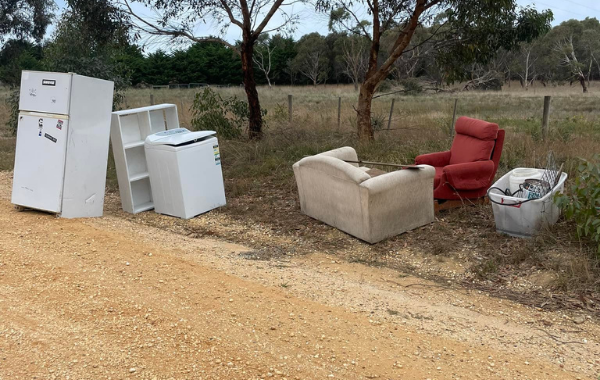 “Many of the items dumped, such as whitegoods, bikes, BBQs and other metal items are accepted free-of-charge at council transfer stations. Some metal recyclers will even pick them up from residential properties,” Mr Pike said.

“There is no excuse for dumping rubbish. It is not only unsightly, it poses unacceptable risks to people and our environment.

“The costs to clean up dumped waste incurred by councils and other land managers is borne by everyone.”

Dumpers caught in the act can receive on-the-spot fines of up to $9000 under environment legislation.