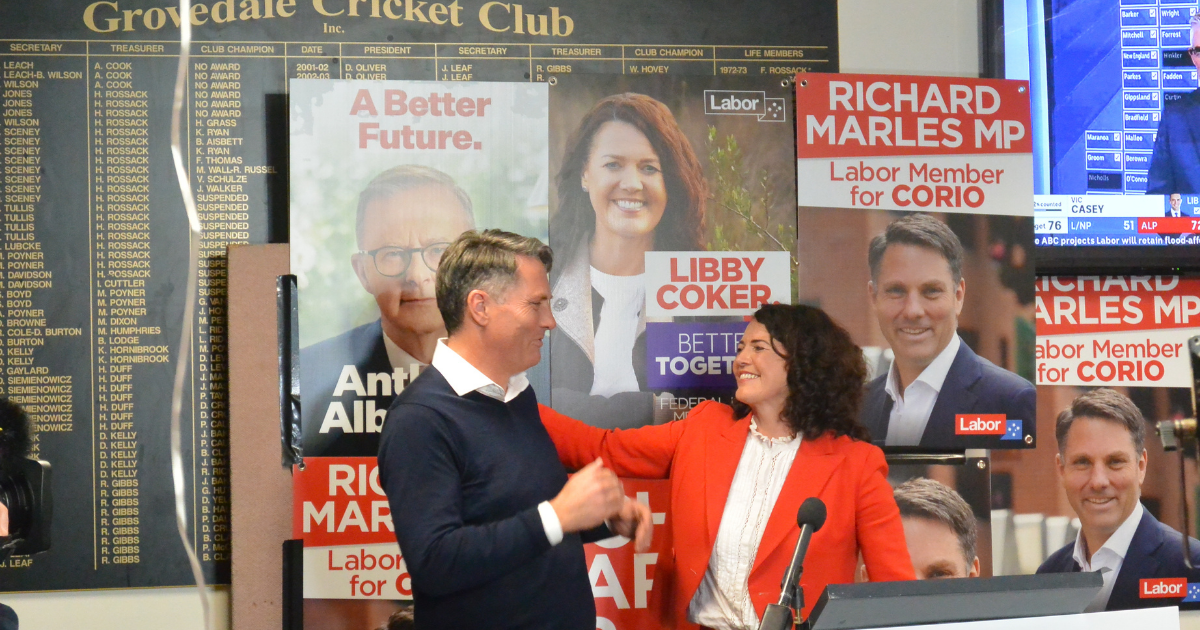 Richard Marles and Libby Coker about to share a hug as they celebrate winning their seats at the federal election. Photos: JAMES TAYLOR

LABOR has had a stunningly successful day at the voting booths, with the party projected to not only hold the local seats of Corangamite and Corio but also form government.

Based on counting so far today (Saturday, May 21), it is impossible for the Liberal National Coalition to hold or gain enough seats retain power, and Labor will govern either in majority or minority, depending on Labor’s final number of seats and the number of crossbenchers.

Ms Coker and Mr Marles addressed hundreds of jubilant supporters at a joint function at the clubrooms at Burdoo Reserve in Grovedale at about 10pm.

“Tonight, people around Australia and people here in Geelong, the Surf Coast and the Bellarine voted for a better future for our country,” Mr Marles said.

“All around our region, people voted against more of the same from Scott Morrison and wanted to see a government in this country that actually has a plan for our nation’s future.”

Ms Coker thanked Mr Marles for his help before and during the campaign.

“I’ve taken a couple of turns to actually win Corangamite, and to win again, hopefully this evening, is a testament to both of us because we’ve been together on this journey,” she said.

“What I really want to see is more care and compassion in government.”

Speaking earlier in the evening at the Liberals’ function at the Grovedale Hotel, Ms Asher said “it doesn’t look like it’s our night tonight”.

She thanked her campaign staff for their efforts, as well as her family, her volunteers, donors, and Victorian Liberal Senator Sarah Henderson – “what an amazing person, just an absolute machine; she has worked tirelessly for us”.

Prime Minister Scott Morrison conceded the election to Opposition Leader Anthony Albanese shortly before 11pm, and announced in a speech afterwards he would also step down as Liberal leader.

“Tonight, it’s a night of disappointment for the Liberals and Nationals, but it’s also a time for the Coalition and members and supporters all across the country to hold their heads high,” Mr Morrison said.