Rising Stars to be celebrated alongside surfing greats 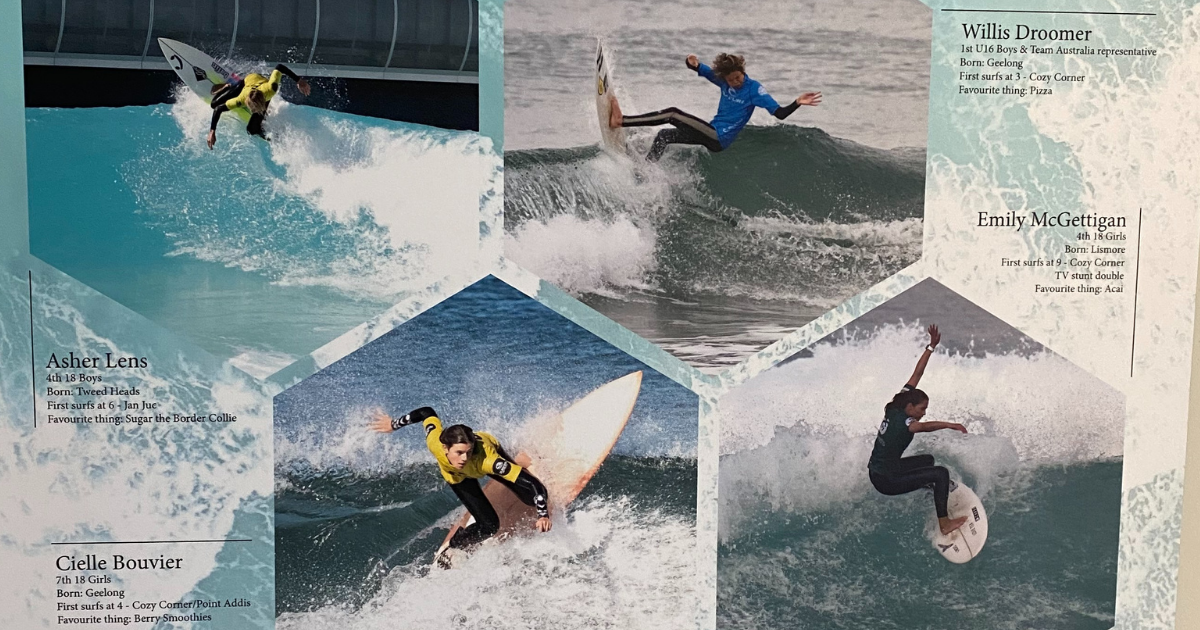 THE Surf Coast Shire’s Rising Stars of surfing will be celebrated alongside some of the sport’s biggest Australian names following their crowning at the launch of the Rip Curl Pro Bells Beach.

The six recipients of the Surf Coast Shire’s Gail Couper and Wayne Lynch awards will feature in a special display in Torquay’s Australian National Surfing Museum, which is also home to the Australian Surfing Hall of Fame.

The Rising Star awards recognise the top three Surf Coast Shire young male and female surfers aged 18 years or under, who have achieved the highest results in 2021.

The 2022 Gail Couper Award recipients were:

The awards celebrate the achievements of the region’s young surfers and inspire them to follow in the footsteps of Surf Coast pioneer surfing champions such as Couper and Lynch.

“Presentation of our Rising Star awards has become an exciting part of our launch for the Rip Curl Pro Bells Beach,” deputy mayor Liz Pattison said.

“We are proud to recognise the dedication, prowess and achievements of these young athletes each year and provide them with a chance to share the stage with past and present champions of world surfing.

“Who knows how far their commitment and aspirations might take them? One of our 2018 Rising Stars India Robinson returned to her home breaks this year as a World Championship Tour rookie.”

Gail Couper presented the awards named in her honour and US star Griffin Colapinto, ranked 7th on the World Championship Tour, presented on Wayne Lynch’s behalf.

One of this year’s Stars Willis Droomer was recently selected in the Australian team for the 2022 World Surfing Junior Championship to be contested in El Salvador next month.

Aged just 15 the Surf Coast Secondary College Year 10 student is one of only three Australians competing in the boys under-18 division. He was unable to attend the Rising Star ceremony but family accepted on his behalf.

As part of the awards ceremony each of the Rising Stars was able to ask Couper and Colapinto questions, which ranged from how they started in the sport to naming their favourite breaks and how they prepared for events.

Couper said she found surfing because she hated netball. Colapinto said he prepares for events with meditation and leg and core exercises.

Cr Pattison welcomed guests to the launch, including World Surf League General Manager Andrew Stark who spoke and hailed the Rip Curl Pro Bells Beach as ‘the Wimbledon of surfing’.

“What is absolutely certain is that everybody missed it deeply. It’s just great to be back,” he said.

The launch event followed a moving Welcome to Country and Smoking Ceremony on the beach by Wadawurrung Woman Corrina Eccles, attended by about 150 people including World Tour stars.

Lorne’s Gail Couper won 10 Bells Beach titles in 11 years, is a five-time national champion, 13-time Victorian champion and has been voted the most influential Victorian female surfer of the past 50 years.

The museum’s 12,000-item collection has recently been independently classified as internationally-significant. The new site will enrich visitor experience and raise the museum’s profile as a visitor destination.

The council hopes a wave of community support will help generate state and federal government funding for the cultural centre.