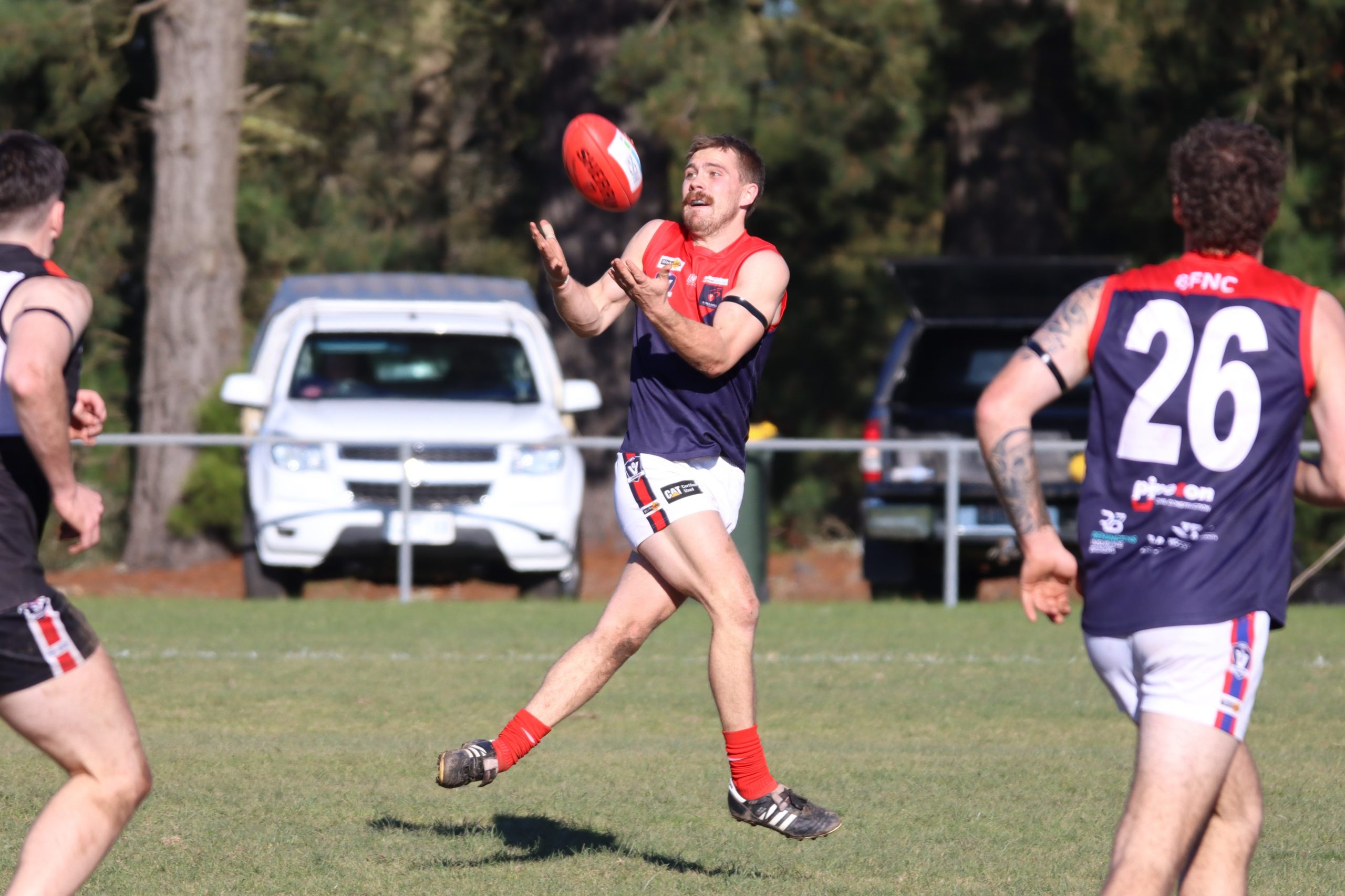 Momentum: Bungaree, including on-baller Andrew Milroy had a big win in round 12. Can they keep the effort up for this week’s clash with reigning premiers Waubra? Photo: ALISTAIR FINLAY

THE inform Demons would fancy their chances to claim a real scalp when they host the reigning premiers this Saturday afternoon. Last round Bungaree were far too good for the bottom placed Carngham-Linton and midfielder Bailey Veale was best on ground with a couple of goals in the important percentage boosting win. The Roos were upstaged by arguably the other most inform team in the Central Highlands Football League in Skipton, will lighting strike twice?

Prediction: Waubra in a tight one.

Two of the competition’s cellar dwellers go to battle in what’s shaping up as a real arm wrestle to see which struggling side gets back on the winners list. Both teams were obliterated last time out, with the Crows no match for Rokewood-Corindhap and the Wickers going down by ten goals against Dunnstown. It has been a serious fall from grace by Beaufort and unfortunately it doesn’t look like it will get any better with Creswick’s pace shaping as the difference here.

An early season premiership favourite, the Bombers are back after their comprehensive 163-point victory over Clunes last weekend. The return of form for livewire Derrick Micallef was the talking point out, with his six majors the start of what Bombers fans hope is a serious surge up the ladder. Without question the Lakies are struggling with a poor first half against Newlyn costing them in what was 50-50 game. Their lack of consistency has been their Achilles heel and it’s hard to see them really amounting much of a challenge against Buninyong.

Sorry Blues fans but after a 262-point loss at the hands of Gordon last weekend, you have to front up against another top four talented side in Dunnstown. The Towners will see this is an easy victory, one that should them cement a top four place but surely Ballan won’t be as terrible this time around…

Prediction: Dunnstown by a staggering margin.

One step forward, two steps back is the talking point out of the Magpies camp after a gutsy win in round eleven against Newlyn was undone when they got annihilated by Buninyong in round 12. What’s their reward for this you ask… a matchup with the most dangerous side in recent memory with the Eagles coming off the back of a truly massive victory. Ex-AFL footballer Shannon Byrnes kicked eight in the win with double digits on his mind this weekend.

Match of the Round as the Burra host the ever-impressive Hoppers. As both sides are entrenched inside the competition’s top four, this one looks like an old fashion eight pointer with a win all but confirming a high-placed finish for the finals, and a loss putting a major dent in those same aspirations. The Burra at home is one of the toughest propositions in football and fresh off the bye, the speed of the McKay Brothers could see them through in a tight affair.

A finals spot is on the line for the Cats in this danger game against the Doggies. James Pratt kept up his great form this year with two goals in a best on ground performance as he continues to be named in coach Chris Banwell’s top players just about every week. Eleven goals straight from the Dogs last week against Springbank faltered them on the scoreboard and they coughed up yet another three-quarter time lead. Scott Hughes booted seven majors and if he gets hot again they will roll Newlyn, if the Cats can nullify his influence they will win. It is really that simple.

Inside the competitions top eight for the first time this year, the Tigers look to continue their winning ways when they host the Saints. Springbank have won six in a row and are heavy favourites to make it seven against the bottom placed side. Chris Quinlan was super in the win over Daylesford with the raking left footer really building into his best form as we approach that right time of year.

Prediction: Springbank in a landslide.