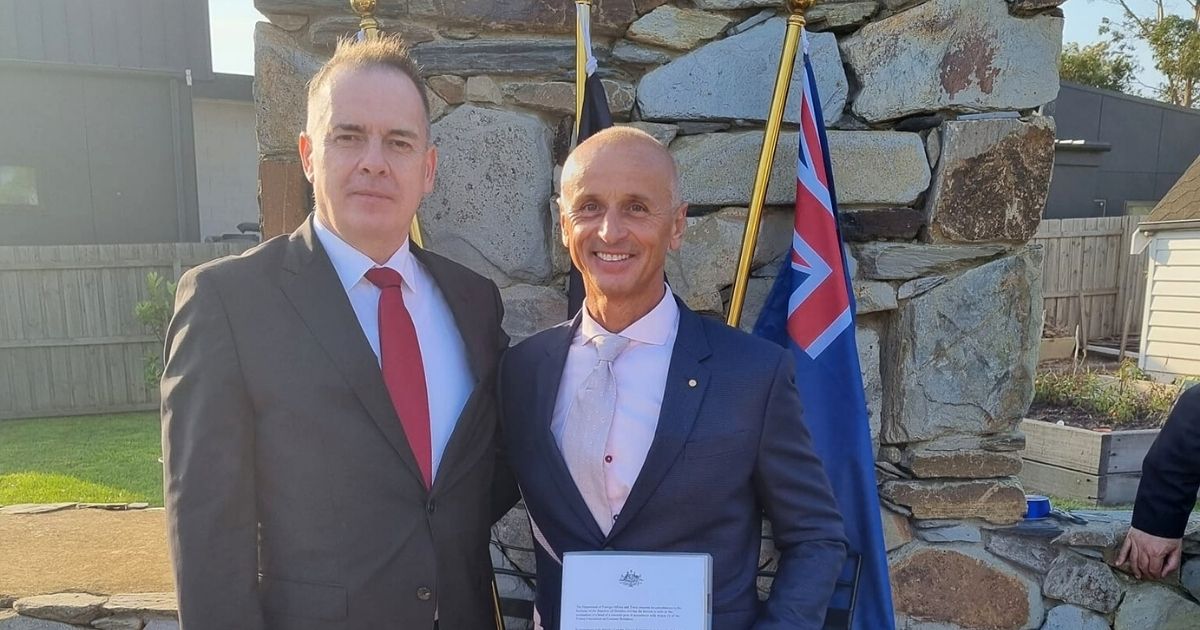 Former Geelong mayor Srechko “Stretch” Kontelj has been appointed to the role of Honorary Consul of the Republic of Slovenia for Victoria.

The appointment was made official on Monday during a visit by the Ambassador of the Republic of Slovenia, Jurij Rifelj, who also officially opened the consul office in Newtown.

Dr Kontelj OAM was one of three children born to Ivanka and Marjan Kontelj who migrated to Australia in 1958 from Slovenia, which was then part of Yugoslavia.

Slovenia, located between Italy and Croatia, has a population of two million people and has its own district language, culture and heritage. The country has been a member of the EU and NATO since 2004.

Dr Kontelj said he was proud to be appointed to the consul role which was previously held by his brother Eddy from 2018 to 2021.

“I see tremendous opportunity for bilateral trade between Slovenia and Australia and despite our relatively small populations, both countries punch above their weight on the international stage,” Dr Kontelj said.

“To have the Ambassador of the Republic of Slovenia visit Geelong reinforces the city’s international credentials which was the aim of the city when I was first elected to the City of Greater Geelong (COGG) council in 1998.

“In the 1990s, Geelong was an economic basket case, rocked by the downscaling of the manufacturing sector and closure of the Pyramid Building Society. Fast forward to 2022 and Geelong is a modern epicentre of education, renowned for its health sector and institutional insurers such as TAC, WorkSafe and NDIS.”

Dr Kontelj served as a Geelong councillor for 17 years and is a former president and chair of the Geelong Ethnic Communities Council and Multicultural Aged Care Centre.

In 2015 he resigned as COGG councillor to take up the role of group general counsel of Specsavers Optometry Group based in Guernsey.

During his five years in Guernsey, Dr Kontelj was appointed Honorary Consul for the Republic of Slovenia to the States of Guernsey, leading several official trips to Slovenia to explore economic opportunities for the two countries.

“My appointment at this critical time as the world comes out of the COVID lockdowns is well timed for Australia and Slovenia to forge stronger economic relations that mature and prosper in the future,” he said.