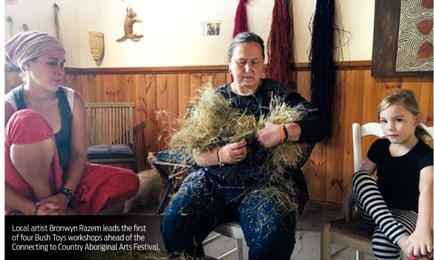 Award-winning traditional fibre artist Bronwyn Razem is leading a series of workshops in Jan Juc in the lead up to this year’s Connecting to Country Aboriginal Arts Festival.
In response to the Christmas Day bushfires, which devastated areas of Wye River and Separation Creek, Connecting to Country has shifted its focus to biodiversity.
Artworks created in the workshops are symbolic of the native wildlife that has been affected by the fires, and will be placed in the bush during the festival’s annual Culturally Guided Walk from Point Addis to Bells Beach.
The Bush Toys will be installed along ARTS FESTIVAL the Ironbark Basin track and will form the ForLorn(e) Wildlife Bush Art Trail on Saturday May 21 as well as featuring at the festival’s Arts Gathering on Sunday May 22.
The workshops have been made possible through a Regional Arts Victoria Quick Response Grant and donations from Surf Coast Arts, Anglesea Baptist Church and the Surf Coast Shire.
The first of the Bush Toys workshops was held on March 11, with many Anglesea Aged Care residents quick to jump on the opportunity to engage with the project after experiencing the Ash Wednesday fires.
More Bush Toys workshops are scheduled for April 8, April 29 and May 13.
Cost is $25 and includes morning/ afternoon and a light lunch.
To book, head to trybooking.com/KUJO. Connecting to Country will be held from May 19-22 with event details to be released in coming weeks.