Shorten speaks up in Grovedale 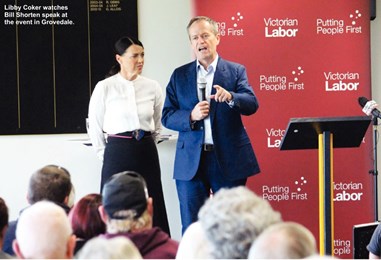 FEDERAL Opposition Leader Bill Shorten made a spirited defence of his time as Labor leader at a meeting in Grovedale on Sunday.
Speaking to a crowd of about 200 people at the Burdoo Recreation Reserve clubrooms, Mr Shorten said Labor had been a strong opposition since losing the election in September 2013, and had been working on its policies since then to become a strong alternative government.
“Australians are hungry for a positive plan for the future.
“Australians want to know there’ll be a government in Canberra who cares about Australian jobs. I’m afraid to say that not even I could predict in September of 2013 that I’d attend some of the last shift meetings at Alcoa Point Henry; men who I’ve worked with and who I know.”
There was a groan from the audience when Mr Shorten mentioned the jobs that would be delivered by the National Broadband Network “when it gets delivered”.
“Our current Prime Minister, his only real goal in public life has been the NBN. He’s doubled the cost and slowed it down; that takes some skill.” He said health and education were critical issues.
“Why be a politician, why form a government, if you’re not willing to help sick people and kids go to school?”
Mr Shorten took questions from the audience on issues including rehab beds for ice users, waiting times for surgery, and shipping policy.
His longest answer was addressed to the dozen or so people in the room holding banners calling for changes to the treatment of refugees.
“If you have a system or a set of policies which will incentivise people smugglers and criminal syndicates, which will put people on boats that are unsafe and people drown, I have to pay attention to that.”
Labor candidate for Corangamite Libby Coker opened her remarks with a question:
“What type of Australia do you want your children to grow up in?”
“I know for me – I am a mother who lives in Aireys Inlet – that for my girls, I want them to grow up in an Australia where everybody gets a chance at a quality education, where everybody gets a chance to have the best healthcare and a secure job with good working conditions and a reasonable wage.”